I Lived in Bangladesh as an American Teenager for a Month

To be quite honest, a year before I first visited Bangladesh I did not know the country existed. I have found this to be quite typical, most Americans have not heard of Bangladesh, or think it is part of India.

Up until December 16th, 1971, Bangladesh was known as “East Pakistan” making Bangladesh a relatively new country, however not new enough that it makes sense for people to not know about it.

I think the main reason people have not heard about Bangladesh is simply that they have not seen it on TV, It’s generally not in the news, it’s not as large as India and people most likely don’t have any friends who have visited or even know anyone from the country.

So, why did I travel alone to Bangladesh at 19? And why did I return at 20? Good question.

I have been running online businesses since the age of 15 (2015) and (keeping this brief as this could be a whole other article) I use freelancers and virtual assistants from third world countries to save on cost. One of these freelancers and now one of my best friends and business partner’s name is Rifat Jipu.

I had posted a job I believe in late 2017 or early 2018 for someone to post photos on a client’s Instagram account. Out of the 30 or so people who applied to that UpWork job, Rifat stood out. I don’t quite remember why, but regardless he did.

Around this time I was coordinating a charity project with my church that would be held in India and at this time I was 18 and had never traveled alone and also had never been anywhere except North America and the Caribbean.

Rifat and I had not only grown in our working relationship but also a strong friendship. My parents and I were both a little unsure about me going alone to India, so I had the idea to invite Rifat as I trusted him and he spoke both Hindi and English (in addition to Bengali and Urdu).

Rifat said yes, and took his first plane ride and first international trip to India where I met him. 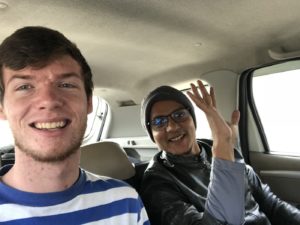 Rifat and I traveled around Northern India starting in New Delhi, and not only did we get to do impactful work together and talk about our business relationship, but we realized we had a lot in common regardless of our cultural, religious, and geological locations. During this trip, I decided I would take Rifat up on his offer to visit his home country of Bangladesh, which I think took him for a big surprise.

In 2019 I flew to Bangladesh from Miami on what seemed like an impossibly long journey. Arriving in Bangladesh after lacking proper sleep and having a lot of jet lag is quite the experience.

People staring at you with no hint of self-consciousness. You wonder if they are starting because you are white, young, and alone or just because you’re the tallest person they have ever seen (I am about 202cm).

You can instantly smell and see the pollution, it doesn’t burn your eyes or nose, but you can definitely feel and see it. The smells are overwhelming, some good, some far too spicy, and others that you don’t want to know where they are coming from. Lastly, the noise. Quiet simply does not exist in Bangladesh.

One thing Rifat must have forgotten to tell me, just days after I was arriving it was Eid, which (unknown to me), is a major Muslim holiday and the whole country shifts locations during this celebration to go back to their villages and be with their families. This meant that the airport was packed. When I went to get my baggage it felt so overwhelming with the combination of all my senses being overwhelmed, people staring at me, women in Burkas (which was foreign to me), and the sheer amount of people.

After about 3 hours I had my luggage and was greeted outside of the airport gates by my good friend Rifat. I can confidently say that was some of the best sleep I ever got in the hotel we booked.

We spent a few days in the capital of Bangladesh which just so happens to be the most populated city in the world. Chaos is an understatement, but before you think I am being negative…. I loved it. People stopping you every second because they have never seen a tourist, random crowds of rickshaw drivers yelling at every passerby to try to get a new customer, food stalls, oh the hundreds of food stalls lining the streets, smiling kids playing rugby in the road. This was something incredible. In a country halfway across the world, with a religion foreign to me, a culture brand new to me I felt so at peace and happy.

Walking through Dhaka never got old. I think you could spend years and never run out of things to see, but there was even more of this fascinating country for me to see.

Next up was Sylhet, an area in the far East part of Bangladesh that has tons of nature and also many of Bangladesh’s wealthier residents who also have homes in the United Kingdom.

Here I was able to go canoeing through a swamp while my 12–14-year-old tour guide sang the whole way to make sure his friends saw he had a white tourist in his boat, I went to a wonderful waterfall touching the border of India and also walked around the town and made friends with the locals.

Instead of flying back to Dhaka we decided to take a 12-hour bus. Surprisingly this bus beat my expectations (although my expectations were extremely low). The bus station itself had two rooms, economy, and first-class. A better way to describe this would be more mosquitos and fewer mosquitos. I was lucky enough to get to sit in the fewer mosquitos room.

The bus was very clean, with carpeted flooring, reclining seats, and a seemingly clean blanket. Rifat and I were lucky enough to be promoted to the first seat on the bus so I would have legroom (being that I am 202cm). While the bus was nice, that did not make the ride so nice…

The roads and Bangladesh are something out of an action movie. Constant mind rattling honking, uneven dirt roads with animals and people running through the center, constantly almost running over rickshaw drivers, getting so close to other vehicles that you literally (and I mean literally) scrape. I could handle all this, but the multiple people throwing up into bags on the bus apparently couldn’t. 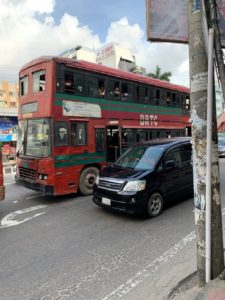 As you can see by this picture, the busses in Bangladesh are literally scrapped on the sides from getting so close to other busses that they rub together (and this is considered normal). Imagine if London or some other developed country threw their 40-year-old bus away after it had well served its time, and then it was sent to hell. That is the average bus in Bangladesh.

After this ~12hr bus ride into Dhaka you could safely say I was exhausted. We were lucky to have a nice hotel to relax at after our journey.

From Dhaka, Rifat and I flew to Khulna, Rifat’s home town. Already Bangladesh gets almost no tourists, and within Bangladesh, Khulna gets no tourism from even other Bengalis. Essentially Khulna is the Delaware of Bangladesh (sorry Delaware). The airport in Khulna was shockingly small, consisting of a small shop selling candy bars, check-in counters for Bangladesh’s three major airlines, one terminal, a waiting room, and a VIP room which I, unfortunately, was not cool enough to go into.

When you land, there is not even a baggage belt, the airline attendants simply bring your bags on a metal cart and let you take yours and depart. As soon as I got my bag I was stopped by an armed Bengali military man. To be quite honest, I was a bit nervous. He was armed with an AK47 and seemed a bit intimidating. When he first stopped my brain was instantly considering the things he might want from me (maybe a bribe?). However, he simply wanted to welcome me to Khulna and was curious about why I was there.

After a grueling ride on some of the worst roads Bangladesh has to offer (thanks to Chinese construction contractors who simply couldn’t care less) I had made it to Khulna City. Here Rifat had 4 or 5 friends overly happy to meet me (and take plenty of selfies — Hello Shaharia if you’re reading this).

Khulna felt a bit like home for me. I know this probably sounds cliche, but it did. I had people around me that I felt like I knew well (from working online with many of them) and just felt completely safe and comfortable. Khulna does not have the crazy pollution that Dhaka has or the same level of chaos. It is more laid back, peaceful, and simple (in a good way).

My trip to Khulna primarily consisted of meeting the freelancers I had been working with remotely through Rifat and eating a lot of amazing local food (a huge thanks to all of the hospitable families I met). 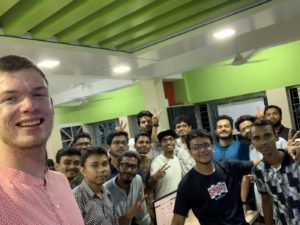 After my trip to Khulna I flew back to Dhaka for a few more days of exploring, and then left to Vietnam (bringing along Rifat for his second trip abroad).

That is the gist of my first trip to Bangladesh. The big question I get asked a lot is “Why did you go back”? As I went back for what was supposed to be a full month (although coronavirus ended this trip prematurely).

I think the answer to that is being in Bangladesh just makes me happy. This is a little crazy considering the country has many clear problems and can be an enormous headache, however, Bangladesh has to have some of the nicest and most curious people I have ever met. If you look through my Facebook friends list you will find that around 80% of all my friends are different Bengalis I have met. These aren’t just random people I have met, I really do have many people I consider friends from this country.

There is also something magical about being the only tourist. When I travel to more touristy areas (think Paris, Prague, Madrid) I am just one of tens of thousands of other people doing the same thing. In Bangladesh I feel like not only a tourist, but an adventurer, an explore. I am creating a story that very few others have anything similar to. Yes, your story about visiting Paris is nice I am sure, but can you tell a story about going to a place no one has heard of? It’s simply exciting and rewarding.

Bangladesh, I’ll be back for you. Just give me some time. 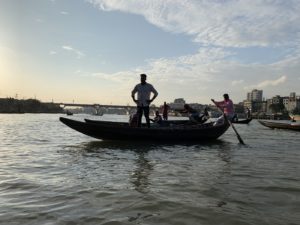